Quadratic formula calculator is the best available tool for solving quadratic equation (second-order polynomial equation) i-e; \(ax^2 + bx + c = 0\), where a not equal to 0. We can solve it manually, but some time it is time consuming, as far as quadratic formula calculator is concerned it is ready to use, just enter the co-efficient of \(x^2\), x and constant in their respective places and by just a single click we can share the accurate output (roots or values) of any assigned quadratic equation. For finding the nature of roots, we have to consider \(b^2 - 4ac\) (discriminant). 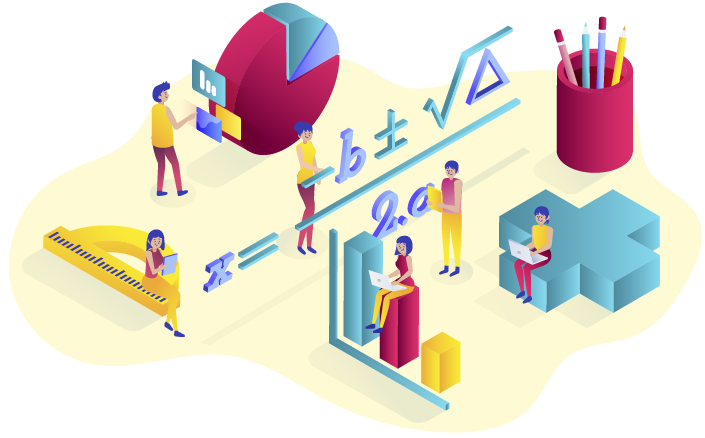 When it is positive, we get real two solutions, when it is zero we get only one solution and when it is negative we get complex solution.

From Abacus To Calculator

An abacus is a mechanical device designed to make arithmetic calculation faster, it represent the evolution of our hands, as tools used for counting. It normally consists on set of beads those can be moved and shaved position of number. The abacus is normally used to help school going children for the basic concept of a counting in this way their motor skill developed.

The revolution of calculator from abacus involved many revolutionary changes, as the abacus with wires or poles running through center of the beads were invented in china. The Japanese adopted the Chinese abacus and later they modified it by removing one bead from the bottom row. The Japanese abacus is known as soroban. In short the abacus (plural abaci or abacuses) also called a counting frame and revolution from abacus to calculator is involved many steps/periods basically our modern calculator is the up-grade and more modified form, where we can handle large and computed figure very precisely. An electronic calculator is a portable electronic device used to perform basic operation (addition, subtraction, multiplication and division) as well as basic arithmetic to complex mathematic. As far as online calculator are related these are ideal tool for quick calculation which is far more convenient than normal everyday use calculator. In short, the abacus was merely the beginning of calculating machine and our online calculator is the most modern device.

Jack Kilby and Edith Clarke are the very first persons. They are credited for first former calculating machine whereas modern abacus is used to assist students with visual impairments. It gives assistance not only to blind persons, as it is equally helpful for all, especially in early year of learning mathematical calculation.

Though still is use in today’s world, the abacus was merely the beginning of mankind’s interest in calculating machine, which has increased exponentially over the years.

It is known the world’s first calculator, which is still in practice. As it offer quick and easy techniques of counting.

Mechanical Calculator – The Next Step

In the era of digital technology few people know for years known has utilized mechanical calculators which were able to do calculation using complicated calculating gearwheels mechanism the first mechanical calculator of this kind was designed by wilhelm shekhar is 1623 even if did not work its principles were later used with success. Blaise Pascal around 1650 designed a mechanical calculator capable of doing sums and subtraction even if it didn’t have big success because it was difficult to use and expensive, it was the start of almost 400 years of research on the subject fifty pieces were built. Towards the end of the 17th century gott fried Leibniz built the first calculator capable of doing the four basic operations he invented the, so called Leibniz wheel which has been used for centuries as the working principle of mechanical calculators based on Pascal which was used as a commercial calculator.

It is the most impossible for us to consider mathematics without something as apparently simple as a calculator it is interesting to know that there was no calculator before 1970. The first tool created specifically for calculation is the abacus but the abacus was not very helpful for division and multiplication. Abacus was invented in Sumeria around 2500B.C. in 1617 when Scottish mathematician John Napier shared a device that came to known as Napier’s bones. The bones are thin rods which are inscribed with multiplication tables but all the calculation was done by mentally. In 1642 the first true calculator was invented, it per normed calculator through a clock work type mechanism it was known as Pascal calculator, invented by French mathematician Blaise Pascal, even though it has improved version but still have few short coming. The mechanism calculator invented by Thomas de colmar in the mid-nineteenth century were easier to use but it was very huge calculator and occupy much space. In 1970, a Japanese company invented first digital pocket calculator with the invention of the first smart phone in 1995 individual began to replace expensive digital calculator with multiuse device.

We have experienced many revolution changes in last few decades, but in this era we are sharing many rapid digital advancement as going digital is the process of adopting digital techniques to improve our way of living by improving our business. It is the intangible process where we can see continuity, where we all are doing something in an integrated manner without being together. In this way we perform our task in more efficient way, where we can share our energy, money and most important time. In this way we can access multiple plat form as far as it is related to calculation, there are many challenges to access online calculator. For a layman, as we all are aware that with the invention of the first smartphone in 1995 people began to replace expensive digital calculators with multiuse device calculators have not only greatly enhanced our ability to perform the regular computation that are involved in everyday life but provided people with the ability to understand mathematics on a broad horizon. Out extensive calculator is user friendly and asses you in many ways, as it reduce cost, save time, you can use it in a comfort zone and in flexibility.